Your student loan terms will dictate how you repay your debt and how much it costs. A key loan term is your variable or fixed interest rate.

Every student loan you take out will come with its own set of terms or conditions by which you’ll repay the debt. Paying attention to these terms before the loan is finalized is crucial, as they dictate not only how much you will pay back to your lender but how you’ll pay it back.

The interest rate on your new student loan will determine the cost of borrowing that money from your lender. This interest will be repaid to the lender in addition to the principal amount,  which is how much you borrow initially, so it’s smart to lock in the lowest interest rate possible.

The terms offered can vary from one lender to the next, but there are two main types of interest on student loans: variable and fixed. We’ll explain how these differ, how each can impact the total cost of your loan, and why most borrowers find fixed-rate loans to be a better fit when it comes to budgeting for and predicting their future loan repayment.

As mentioned, there are two primary types of interest rates that you will encounter when taking out a student loan. Depending on your lender and the type of loan, you’ll have either a fixed or variable interest rate.

Your loan’s interest rate plays a large role in determining how much that loan will cost you from disbursement to your final payment. Having a fixed or variable interest rate on that loan can also influence this cost, as well as impact your monthly payment obligation throughout the repayment period.

A variable rate may be based on LIBOR (the London Interbank Offered Rate) or the prime rate. Prime and LIBOR (which is being eliminated) are both benchmark rates that banks use as a baseline to calculate their own loan costs. Some lenders may use a Secured Overnight Financing Rate (SOFR)-based index as a replacement.

How much more (or less) could a variable rate loan cost you compared to a fixed-rate student loan? Let’s take two five-year student loans, each for $10,000. One loan has a fixed rate of 6.0% APR, while the other has a variable rate of 3.5% + prime (which, in this example, is 2% when the loan is first disbursed).

As you can see, some years will see lower rates if your APR is variable. Some years, your interest rate will be higher. In the end, a variable rate may save you money over a fixed rate, but it’s never guaranteed. In some cases, a variable rate could increase the amount you pay over time.

Both fixed and variable rates have benefits and drawbacks.

Is a fixed or variable rate better?

You’ll want to consider your repayment strategy when choosing between a fixed or variable rate. You should also look at the different quotes you’re offered by lenders to see how much money can potentially be saved with each scenario.

You’ll also want to take your personal economic situation into account. If you’re on a tight budget and cannot manage a potentially-increasing loan payment, variable rates might not be the right choice.

Here are the pros and cons of each type of rate to help you make an informed decision.

Pros and cons of fixed rates

Pros and cons of variable rates

How are fixed and variable rates calculated?

If a student loan lender offers fixed and variable interest rates, you’ll likely find that these rates aren’t usually the same. In exchange for their predictability and consistency, fixed rates are typically a bit higher. With variable rates, you are snagging a lower rate now in exchange for the potential of future rate adjustments.

Additionally, each lender has its own proprietary way of calculating its rates. The rate range depends on the lender’s risk appetite, products, and loan limits. Your student loan rate depends on personal factors such as your credit history and income, as well as the details of the loan itself.

How are fixed rates calculated?

A fixed interest rate is one that’s locked in at the time you sign your loan agreement. This rate stays the same for the lifetime of the loan; regardless of what happens with your own finances, the economy or other market benchmark rates, your loan’s APR will not change.

With federal student loans, fixed rates are determined by law, set each year by Congress according to 10-year Treasury Note rates. These fixed rates apply to any federal loans originated (or taken out) that year.

For private student loan lenders, fixed rates aren’t usually tied (at least, not directly) to any economic indicators or benchmarks. Instead, these rates are set by the private lenders themselves based on their own assessment of the current market conditions.

Your personal financial details can also affect your fixed loan rates. As a borrower or cosigner, things like your income, credit history/credit score, and even your loan term can affect the interest rate you’re offered.

How are variable rates calculated?

Variable interest rates are set by the lenders themselves but are based on, and can fluctuate along with, certain federal policies and index rates.

Variable rates are not offered on federal student loans. Instead, private lenders will calculate their variable rates as a premium on top of an index or benchmark rate. Most often, this is the prime rate or LIBOR until it is replaced.

Banks originate loans with an interest rate that is a certain percentage above either of these benchmarks; as the benchmark rises or falls, so does the borrower’s rate.

Each private lender has its own processes and criteria for determining overall rates as well as individual rates. That’s why the rate range differs from one lender to another. The rates offered to student loan applicants and/or their cosigners will vary according to their individual factors.

Lenders offer student loans with fixed rates because of market demand and the predictability that fixed rates offer. These terms guarantee that the lender will receive a set amount from a borrower each month, and they can predict exactly how much they’ll make over the lifetime of that loan.

Federal student loans always come with standardized fixed rates. This means that all students receiving these loans in a specific timeframe will have the same interest rate, regardless of their credit history. Federal rates also tend to be lower than those offered by private lenders.

It’s also important to note that this rate can differ depending on what type of federal loan you take out and whether you’re an undergraduate or graduate student.

Here’s a look at some of the current fixed APRs on student loans:

Students looking to consolidate or refinance their existing loans can also lock in a low fixed APR with many different lenders.

You can also finance your education with a student loan with a variable rate. These are usually lower than the fixed interest rates that a lender may offer, though they also have the potential to rise or fall over the course of the loan.

Lenders typically have a cap on the highest interest they’re able to charge on a variable-rate loan. If rates drop, however, borrowers may find themselves saving money on their interest payments.

Many private student loan lenders offer variable interest rates. Federal loans, on the other hand, are only offered as fixed-rate products, so you won’t be able to get a variable rate on those loans.

Here’s what you can expect from some popular lenders when it comes to taking out a variable APR loan:

Which rate type do most borrowers choose?

Both fixed and variable interest rates have their own benefits and drawbacks. Depending on your financial situation, one type of interest rate might make more sense for you than the other.

This is likely because these loans are more predictable, with an interest rate that isn’t subject to change over time. Even though these rates are generally higher at origination than variable rates from the same lender, borrowers will always know exactly how much they still owe on their loan, what to budget for their monthly payment, and how much they’ll pay in interest over the lifetime of that loan.

How do I compare variable- vs fixed-rate student loans?

It’s impossible to predict exactly what will happen with interest rates in the future. If index rates rise, so can your variable-rate loans; because of this, it’s difficult to accurately compare the future cost of a fixed-rate student loan versus a variable-rate loan.

When weighing this decision, students should consider a few important points:

What if you decide on one type of loan now and later want to change it? Well, you can’t change your loan type once it’s been taken out … but that doesn’t mean you’re stuck with that rate type or loan structure for the duration of the debt repayment.

With a refinance, you can make whatever changes you want. Refinancing your student loans allows you to consolidate multiple balances into one account. You’re also able to snag a variable or fixed rate for the entire refinanced balance, potentially saving money if you can lower your existing rates.

Refinancing can be a very beneficial move as long as it is done carefully and after good consideration. Borrowers should wait until they are able to qualify for lower interest rates and better loan terms to ensure that their new student loan refinance doesn’t wind up costing them more.

Choosing between variable or fixed student loan interest rates is a personal choice. The right answer depends on whether you’re applying for private or federal student loans, your credit history, and your individual preferences. There’s no right or wrong answer so it’s best to consider and calculate which is best for you. 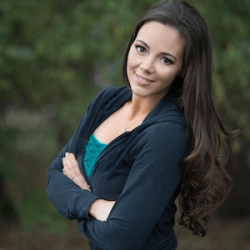 Stephanie is a DC-based freelance writer, specializing in a range of personal and household finance topics. She has an undergraduate degree from Baylor University and is currently a candidate for CFP certification. You can find her work on sites such as MSN, Yahoo! Finance, Fox Business, Investopedia, Credit Karma, and much more.
Search