Founded during the dawn of the commercial airline business, United Airlines, Inc. embarked on a journey through a competitive and dynamic industry that developed into the gargantuan modern counterpart seen today. Of this industry, United Airlines is the largest airline company in the world when it comes to the number of available destinations.

Using evidence of the current success United Airlines exhibits, one can only assume that this leading company offers products to its customers in order to promote repeat business and improved customer satisfaction. 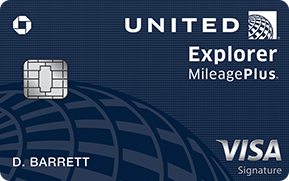 Savor the United Club membership before and after flights

There is a stark contrast between the headline benefits of the Explorer Card and the Club Card; the first paragraph of the next section describes the Club Card benefits while this paragraph focuses on the Club Card benefits. After account activation, a cardholder receives 30,000 bonus miles for spending $1000 within the first three months (miles program offers redemption for travel discounts). During that same three month period, a bonus gift of 5000 miles is awarded for adding an additional authorized user to an account. Additionally, an annual 10,000 mile reward is given for spending $25,000 in that year. (See paragraph one of United MileagePlus Club Card for comparison).

There are several rates at which a cardholder can accrue miles towards travel redemptions. Two miles are awarded for every dollar spent on United Airline tickets, and one mile is awarded on all other purchases. These miles do not expire. (See paragraph two of United MIleagePlus Club Card for comparison) 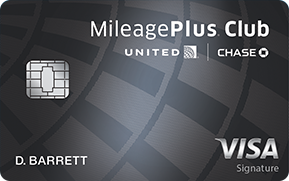 The Club card offers different headline benefits than the Explorer Card which is mainly access to the United Club, hence the namesake of the card. Cardholders gain exclusive access to this club or a participating Star Alliance lounge while waiting for a flight. Cardholders receive preferential treatment while moving through airport security and check-in milestones.

Similar to the Explorer Card, a Club card member can build up points towards travel redemptions. Generally, 1.5 miles are awarded per dollar spent on regular purchases while two miles are awarded for direct United Airline purchases. These miles do not expire. (see paragraph two of United MileagePlus Explorer Card for comparison)

Travel benefits for the Club Card include free bag checks on the first and second bag as opposed to only one with the Explorer card. While Explorer Card Members have preferential treatment, Club Card members receive Premier Access when moving through the same obstacles. There is also a greater chance of receiving a premier upgrade on a ticket. (See paragraph three of United MileagePlus Explorer Card for comparison)

The Explorer Card comes with a $95 annual fee for holding onto the card. Balance transfer and cash advance fees are typical for a Chase credit card; they are $5 or 5% and $10 or 5%, respectively. There is no foreign transaction fee to worry about. Late and returned payments could cost as much as $37 at maximum.

Aside from the hefty $450 annual fee for holding the Club Card, all rates and fees are the same as the Club Card’s counterpart, the MileagePlus Explorer Card.

The APRs on a MileagePlus Club card are the same as the rates on the explorer card.

Jeff Gitlen is a graduate of the University of Delaware. He writes about a wide range of financial topics including student loans, credit cards, small business financing, and more. His work has been featured on a number of sites including Bloomberg, CNBC, Forbes, Market Watch, and more.
Search