Centurion Card Review: What to Know About the American Express Black Card

The American Express Black Card is the most exclusive credit card on the market. Its perks and rewards are only known through rumors, but with an annual fee of $2,500, they're sure to be great. 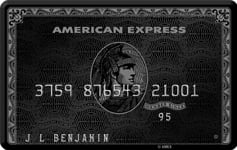 Exclusive 24/7 concierge service for just about anything

The American Express Black Card: Everything You Need to Know About the Centurion Card

The Amex Black Card is designed for the 1%, and only the 1% can really know what it’s all about. The card’s fame is thanks to its exclusivity. The card is invite-only, and you need to have a high net worth and spend upwards of $350k to $500k per year on an existing American Express card to snag an invite.

The card offers a lot of benefits that you won’t be able to get with even the best credit cards, and that makes the $7,500 initiation fee and the $2,500 annual membership fee worthwhile to its users.

What Is the Official Name of the American Express Black Card?

Despite the fact that the card is known colloquially as the Amex Black Card, the storied charge card is officially named the Centurion® Card from American Express. It got the “Black Card” moniker because the card is made of black anodized titanium.

While the card is invite-only, there are some things you can do to increase your likelihood of getting an invitation. First, you have to already be an Amex user in order to qualify. Next, you have to spend a significant amount of money on your card each year. While it’s never been stated publicly, rumors have it that users likely spend as much as $350,000 to $450,000 per year on their cards in order to qualify. That said, there is both a business and a personal card option and more people are likely to qualify based on their business expenses. But it’s still an elite group.

American Express is pretty tight-lipped about the rewards and benefits that come with the Centurion card, but cardholder reports give us a good idea of the kind of benefits these elite cardholders enjoy.

Surprisingly, cardholders report they receive a low rate of 1 Membership Rewards point per $1 spent on most purchases and 1.5 points per $1 on purchases of more than $5,000. This is a lower rewards rate than even some free credit cards, but of course, people sign-up for the Black Card for its other perks.

Reportedly, carrying this card automatically qualifies you for a number of different elite travel clubs, such as Platinum Medallion Status with Delta Airlines, Diamond Status with Hilton, just to name some examples. These status tiers give you great benefits like free room upgrades, free flight upgrades, priority boarding, and priority for car rentals.

The card also comes with access to Centurion Lounges, personal assistance getting through customs and immigration routines at international airports, a $200 airline travel credit, a fee credit for Global Entry or TSA PreCheck applications, and a host of different travel insurance policies.

Finally, you’ll get access to a 24/7 concierge service that you can ask for just about anything. The concierge service can help you get unprecedented access to special events, concerts, and hard-to-get reservations at elite restaurants around the world.

One big downside of the American Express Black Card is that you can’t just get the card if you want it. Its exclusivity means that many people who would love to have one will never get an invite.

The high cost of membership is another major con. Of course, if you do get an invite, a $2,500 annual fee probably isn’t a big concern, but most cardholders may end up paying more for the bragging rights that come with the card than any tangible benefits the card actually provides.

How it Compares to Similar Cards

If you’re in the market for an exclusive credit card, there are several alternatives that get you high-quality perks without all the mystery that comes with the American Express Centurion Card.

The American Express Black Card vs The Mastercard Black Card

The card comes with a hefty $495 annual fee, but that’s far less than you’d pay for the Centurion Card. It has perks like 1.5% cash back rewards (or 2% when redeemed for airfare), a 24/7 concierge and luxury benefits like airport lounge access, priority passes for travel, and a $100 annual airline credit. It provides some great travel benefits, just not to the same extent that Centurion cardholders will enjoy.

The American Express Black Card vs The Mastercard Gold Card

The Mastercard Gold Card is a gold-plated credit card that is comparable to the American Express Black Card—although it isn’t as expensive or as exclusive. It has a $995 annual fee and you can apply for it whenever you want—no invitation needed.

The card gives users 2 points for every $1 they redeem for cash back, but points are worth 2% when redeemed for cash back for travel. It also offers other travel benefits like a 24/7 concierge, Priority Pass Select access to airport lounges, and various forms of travel insurance. While it’s cheaper than the Amex Black Card, it’s still likely not worth it due to the very high annual fee.

Bottom Line: Is the American Express Black Card All It’s Chalked Up to Be?

Ultimately, the Amex Black Card is more of a status symbol than a card that’s going to provide you with a lot of value in return for its hefty initiation fee and annual fee. But if you’re spending over $350,000 a year on an Amex card already, you likely don’t care too much about the cost of the membership and you might enjoy some of the unique perks and the status that the Amex Black Card provides. For the rest of us, a high-end card that offers transparent benefits for a more reasonable price, such as the American Express Platinum Card or the Chase Sapphire Reserve, is probably a better option.

Amanda Reaume writes about personal finance, credit, and student loans. Her work has appeared on sites like Forbes, Yahoo! Finance, Time, and FoxBusiness and she is the author of the book Money is Everything: Personal Finance for the Brave New Economy.
Search